This statue of a hero sitting cross-legged was probably part of a heroic and votive shrine.

The character must have been elevated and surrounded by painted steles.  This shrine was destroyed and the statue reused for the construction of the surrounding wall, on the southern side of the bouleuterion. It was indeed discovered in its foundations. It therefore dates from the pre-Hellenic period. 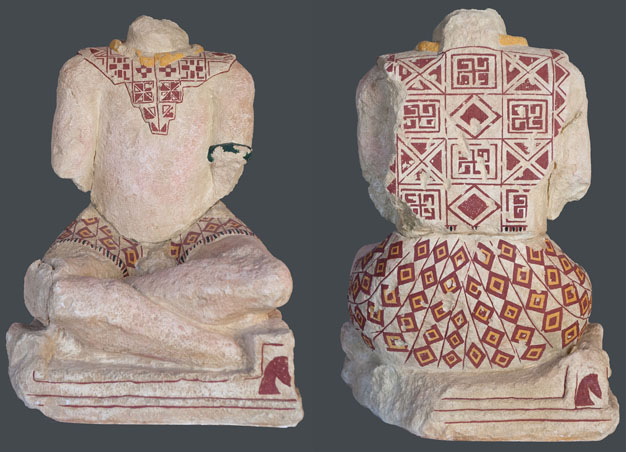 "The statue is deprived of its head; in its current state it measures 0.8 m. in height; the character is sitting cross-legged in a Buddhist pose, on a base finished at the corners by an acroterion. A sealing mortise has been dug under the base.

The god or hero is dressed in a body-clinging tunic stopping at mid-thigh, but open in front to reveal the genitals; a kind of cope is draped over his shoulders closing in a low-cut point on his chest, while it covers his back with a thick square scapular; the collar is open and decorated with the Gallic torque. The left arm is decorated with a bracelet above the elbow, the bent forearm is missing; his hand was resting on an object (head?), which has disappeared and whose remains can be seen on the knee; the right arm is cut off at the elbow.

The simultaneous dismemberment of these sculptures, reused in the same foundation, whether in capitals or the statue, reflects the removal of these materials to a common source, which can only be the ruins of a whole whose cultural role is attested by the presence of the crouching man; the latter characterising, with pillars for cut heads, reused at the same time as the sculptures, the Salluvian sanctuaries whose historically known destruction was due to the punitive operations carried out, at the request of Marseille, by the Romans in 125-124 BC".
Rolland Henri. Hellenistic sculptures found at Glanum. In: Comptes rendus des séances de l'Académie desInscriptions et Belles-Lettres, 112th year, N. 1, 1968

> Learn more about the Young Roman with gold pendant and the Captive Gaul.